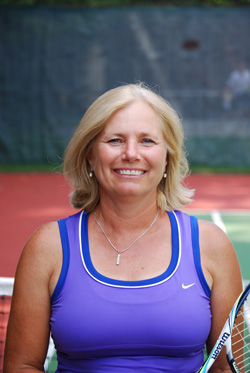 Success as the founder and longtime head of the Upper St. Clair Tennis Development Program has earned Janice Irwin a prestigious regional award.

One of the association's 17 sections, Middle States consists of Pennsylvania, Delaware, northwestern West Virginia and parts of New Jersey.

Irwin was honored at an awards dinner this month in Pine, where she also received the Allegheny Mountain District Teaching Professional of the Year Award.

Allegheny Mountain, which is composed of 24 Western Pennsylvania counties and four in northwestern West Virginia, is one of six districts in Middle States.

In more than 30 years as an instructor, Irwin said she has lost count of the youngsters she guided who have gone to compete for NCAA Division I schools and other colleges.

Today, Irwin oversees 300 boys and girls, about 60 to 80 who are United States Tennis Association junior players.

Irwin said she was pleasantly surprised to be honored by the section as well as the district.

“She's a great leader in the Pittsburgh tennis community (who) has really become an integral part of that area over the years,” Gladysz said. (She) is so well respected amongst her peers.”

Irwin, who teaches 25 to 30 hours a week, said staying abreast of trends has helped.

“My job is to continue my education,” said Irwin, adding tennis is harder and faster than when she began her career. “I'm still learning and want to learn more.

“It keeps it exciting to learn and expose my kids to (what I've learned).”

Irwin said building relationships has been vital to her success. Some staff members have been with her 25 to 30 years, she said.

Former players visit and stay in touch, including Riske, who texts and emails frequently.

“Janice now is one of my greatest friends,” said Riske, 24, a member of the Women's Tennis Association who reached the third round at Wimbledon the last two years and has competed in other Grand Slam tournaments.

“The thing about Jan is that she wants to develop her students into the best tennis players that they can be, but more importantly, she wants them to be the best people they can be, (to have) accountability for their actions and (act) in a respectful manner on and off the court.

“She lives her own life in an inspiring way and it rubs off (on) everyone around her.”

A graduate of the University of Pittsburgh, Irwin took up coaching after failing to find full-time employment as a physical education instructor.

Kelle Cunningham, a Middle States service representative for the Allegheny Mountain District, has fond memories of playing for Irwin at Bethel Park.

“She was always smiling and in a good mood, similar to today,” said Cunningham, 48, of Peters Township. “She was very passionate about tennis and wanted all of us to love it like she did.

“She really was a friend more than a coach, promoting teamwork, fun and fundamentals.”

“She's got a thing, a gift, where she can boost your confidence even after your worst match,” said Garofoli, 45, of Mt. Lebanon.

Mia Williams, 8, of the North Side has enjoyed being instructed by Irwin the last two years.